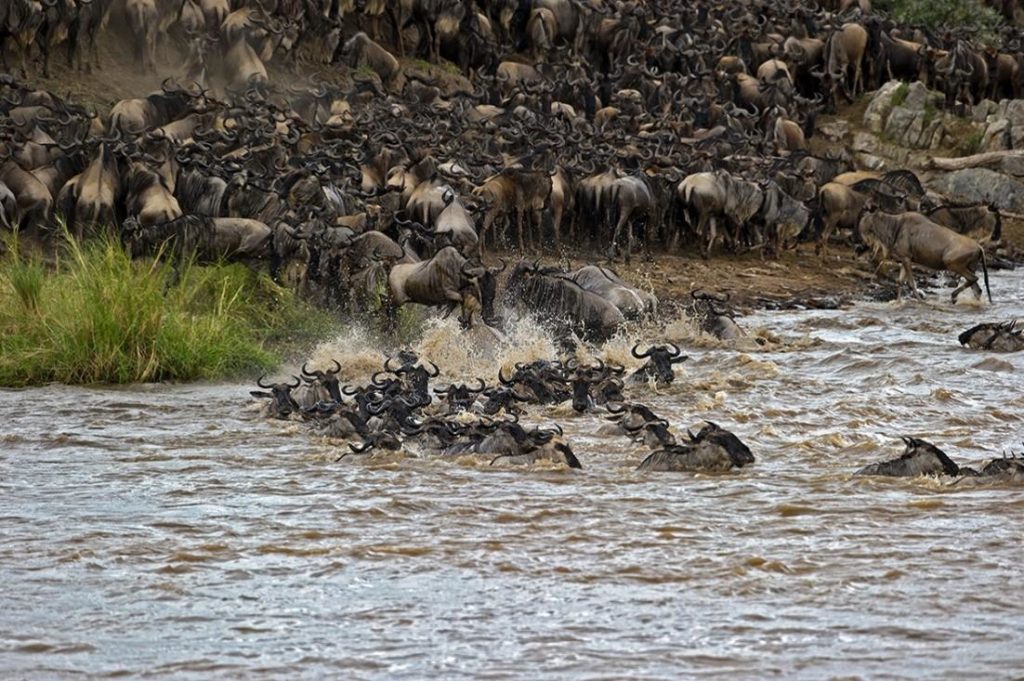 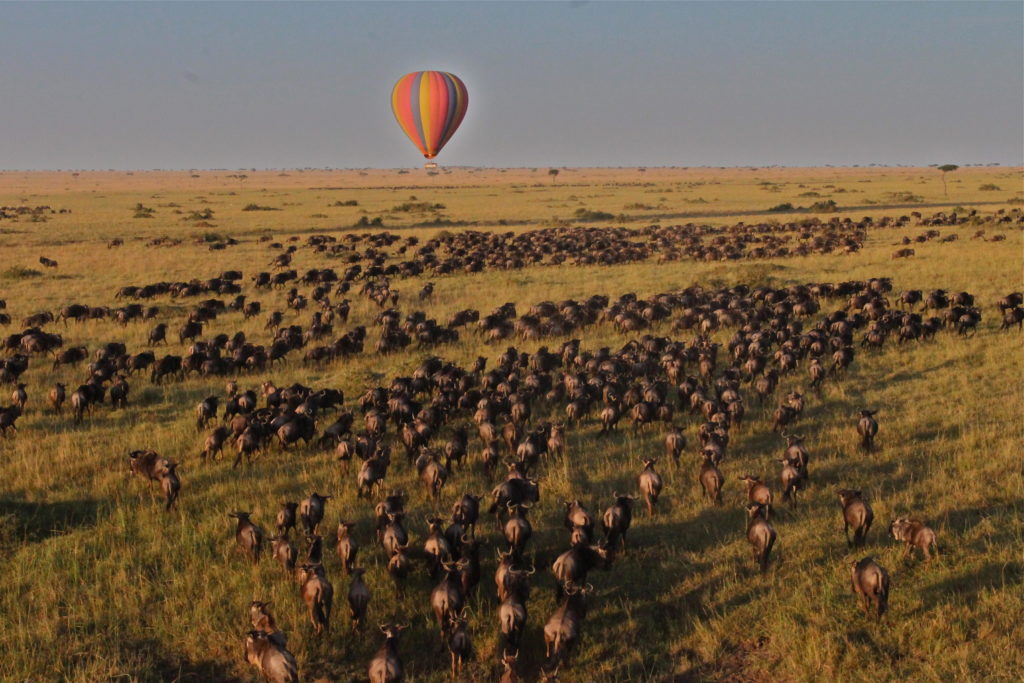 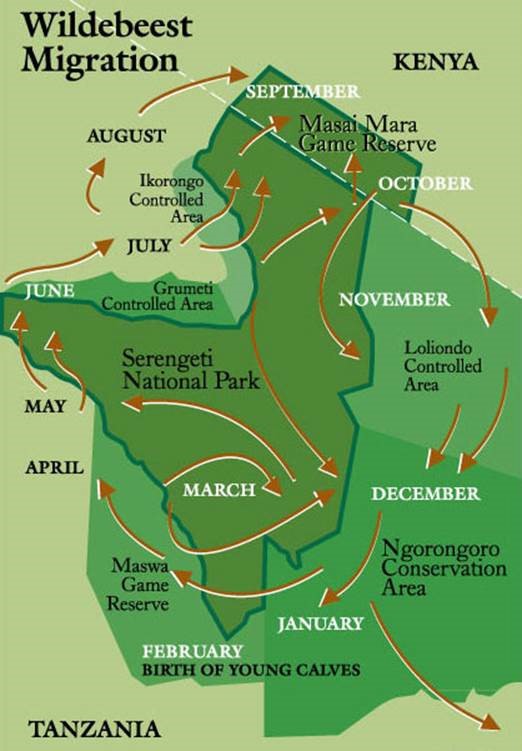 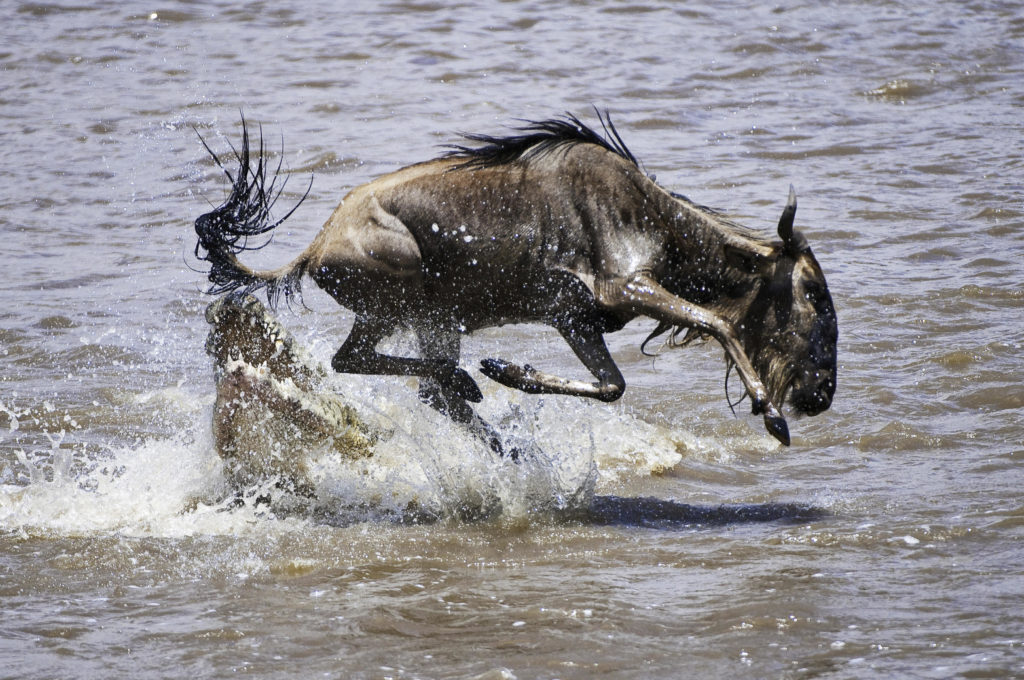 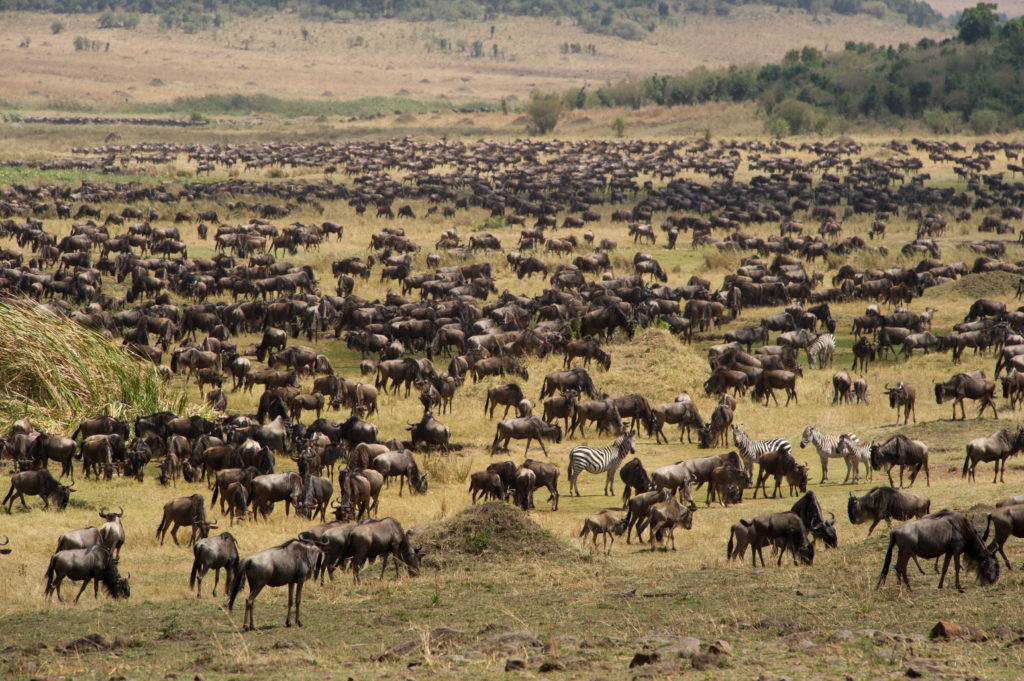 When and Where Does the Migration Happen?
Every year the plains of East Africa are home to one of the world’s greatest wildlife spectacles, the migration of 1.4 million wildebeest and hundreds of thousands zebra and gazelle, tracked by Africa’s great predators. The migration is often described as a set circuit that occurs between Tanzania’s Serengeti plains in the south and Kenya’s Maasai Mara in the north between January and December each year but the reality of the migration is much more complex. Some people confuse seeing the migration with seeing a river crossing.  This is not the case, and you can definitely feel pleased at seeing the migration even without ever viewing a crossing.  Especially since there are many months in the year when the migration movements will be nowhere near a river, or the iconic Mara River crossing area. At a most basic level the migration is driven by the rain and the new grass that follows it. Given this unpredictability here are broad guidelines:

Between December and April the wildebeest are on the short grass plains in the Ndutu area in the southern Serengeti but depending on the local rainfall they might be in a much wider area between Ndutu and the Ngorongoro Conservation Area (just southeast of Serengeti National Park but not inside Ngorongoro Crater itself). During this time, typically in February, wildebeest mothers give birth to more than 500,000 calves in a 2-3 week period. Within 10 minutes of birth wildebeest calves are on their feet.

After April and May, the rains stop and the plains in the south and east of the Serengeti dry out. This shift causes the herds start to moving to the north and west where there is more grass and more dependable water. During this period not all the wildebeest and zebra follow the same route. Some travel further west than others who head northwest. This means that, part of the Migration will head to the Western Corridor and the Grumeti River before proceeding north and large numbers may also go up through the Loliondo area or through the Seronera area and into Lobo.

June to July is a transitional period between the rains and the dry season. As they concentrate on the few remaining green patches of savannah, the huge herds reform and push further north towards the Maasai Mara.

Between July and August the wildebeest move into Kenya’s Maasai Mara crossing the Mara River in large numbers.

It is these crossings that generate some of the iconic images of the migration but catching a river crossing in action is a challenge. The area where the crossings occur is vast, even traveling by car and even if you find a group of animals at the edge of the water they are cautious (and stupid) and may not cross for an hour or a day because of real or imagine threats. Although rare and elusive, if you are lucky enough to catch a river crossing its guaranteed to be the unforgettable experiences as a herd which has stood at the water’s edge suddenly crosses in a panicked mass, struggling to get to the other side of a crocodile filled river.

As with the other stages of the migration the exact timing of the crossing into the Mara is hard to predict and depends on the rains. In a dry year, the ﬁrst wildebeest could be near the Mara River in early July; in a wet year, by mid-August. If there is plenty of grass and water, the herds may be spread out all the way from Seronera to the Mara River. In addition it is often the case that the whole Migration may not move into Kenya. Many animals remain in the Northern Serengeti or cross and re-cross the Mara and the border between Kenya and Tanzania several times following periodic rain showers.  This carries on until October/November when the animals in Kenya begin moving back into the Northern Serengeti. Between November and December many will move south within the Serengeti to the breeding and calving grounds where they spend December through March.

It is important to remember that the whole migration is millions of animals and is never in one place at one time, they cover a huge area. As a traveler you can be in a region where the migration has supposedly passed or has yet to arrive and still see thousands of animals.

Migration Viewing Tips
World class safari guide Richard Knocker puts it best when he says “the Migration is not a continuously forward motion. They go forward, backwards, and to the sides, they mill around, they split up, they join forces again, they walk in a line, the spread out, or they hang around together. You can never predict with certainty where they will be; the best you can do is suggest likely timing based on past experience, but you can never guarantee the Migration one hundred percent.”

Given all this complexity, here are recommendations that will give you a great chance to see the migration. These recommendations reflect where wildebeest tend to be at a given time of year and although they are based on years of experience they are estimates! Nature doesn’t stick to our schedule and is not orchestrated for the tourists!

Don’t Wait for the Migration to Come to You, Go to the Migration! Mobile Camps
Because the migration can vary from year to year mobile camps are a great way to make sure you are perfectly situated. These camps move every 3-4 months, moving north within Tanzania to follow the migration. The locations for all the mobile camps are similar so what really sets them apart is the level of accommodation.

If you’re just beginning your research, the notion of a “tented safari” might conjure images of summer camp, bathing in streams and outdoor “facilities”.  Nothing could be further from reality!  While there are certainly some rustic camps in Africa, the tented camps Anastasia’s Africa favors are a much more luxurious affair.  Depending on the budget, accommodations may range from simple:  comfortable beds, en-suite bath and shower, hearty meals, gracious hospitality and exceptional guiding, to 5-star plus:  teak furniture, swimming pools, gourmet food and wine, award-winning private guides and jetting from camp-to-camp.

It’s also important to know there are several types of tented safari camps.  A permanent tented camp is just as it sounds:  the camp remains in a fixed spot throughout the year which allows for more luxurious touches, from both a design and convenience perspective.  A semi-permanent camp is one that remains stationary but can be moved if need be.  This type of camp often also includes more upscale touches than the mobile tented camp, which can be a bit more rustic given it is designed to move twice per year to ensure optimal viewing of the Great Migration.    Luxury travelers need not fear, however:  many mobile camps are astonishingly well-appointed, with elegant design rivaling some private homes.

No matter which type of tented camp you choose, spending all or part of your classic safari “under canvas” is an experience not to be missed!